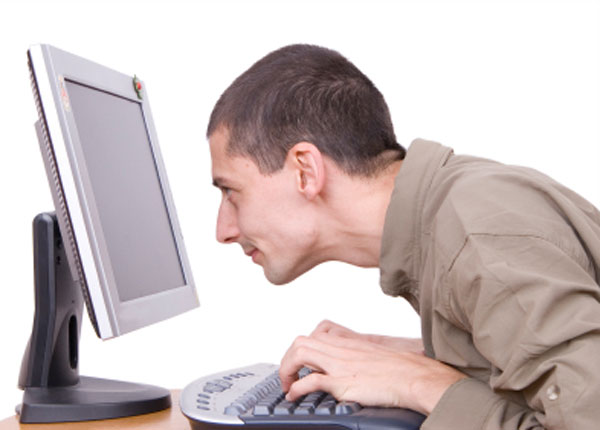 Computers stand out as possibly the most important invention of the twentieth century. The versatile silicon chip has found an important place in our life. Popular books and magazines proclaim that they are witnessing a ‘computer revolution’, entering a ‘micro-millenium’ in which computers will completely transform our lives. We have been intoxicated with scientific technology and have succumbed to its lure. We have for the most part failed to question seriously its adverse impact on our health.

Young children instead of playing outdoor games are spending long hours amusing themselves with computer games, which ultimately leads to a sedentary lifestyle. There is a disruption of the established patterns of interaction with nature, which is not a healthy life style. The widespread use of computers has led to some serious health problems.

Risks associated with computer usage for long hours are as follows:

a. Tendonitis means swelling of a tendon due to repeated movement or strain on that tendon. Symptoms of tendonitis of the wrist include extreme pain extending from the forearm to the hand, along with the tingling in the fingers.

b. Carpal tunnel syndrome is an inflammation of the nerve that connects the forearm to the palm of the wrist. It is characterized by burning pain when there is compression of the nerve, along with numbness and tingling in the thumb and first two fingers.

If untreated, these disorders can lead to permanent body damage.

This disorder can be prevented by taking frequent breaks during computer sessions to exercise your arms and hands. OSHA (Occupational Safety and Health Administration) has developed industry-specific and task-specific guidelines designed to prevent workplace injuries associated with computer usage.

Another type of health-related condition because of spending long hours on the computer is computer vision syndrome. It leads to xerophthalmia and other vision defects. Eyestrain associated with this disorder is not known to have serious long-term consequences.

It can be prevented by taking a break every 15 minutes.

a. Look into the distance and focus on an object for 20 to 30 seconds. Roll your eyes in a complete circle. Close your eyes for at least a minute.

b. Blink your eyes every five minutes.

People who spend their whole day on the computer usually complain of lower back pain, muscular, and emotional fatigue. Lower back pain sometimes is caused by poor posture. Always sit in the right posture properly while working. Take a break every 30 to 60 minutes – stand up, walk around, or stretch. Another way to help prevent these injuries is to be sure your workplace is designed ergonomically.

Two behavioral health risks associated with computer overuse are computer addiction, wherein the patient becomes addicted to computers and technology overload, which leads to withdrawal symptoms when the person is not allowed to use the computer.

The sedentary lifestyle because of computer overuse may also lead to obesity, which is the root of all other systemic illnesses.

An important health concern is the possible risks due to the radiation emitted from computers or laptops and other wireless technology, which might lead to gonadal damage, sterility in females, impotency in males or fetal damage during pregnancy.

Prevention of these perils of progress is possible only by wise and sensible usage of the computer.