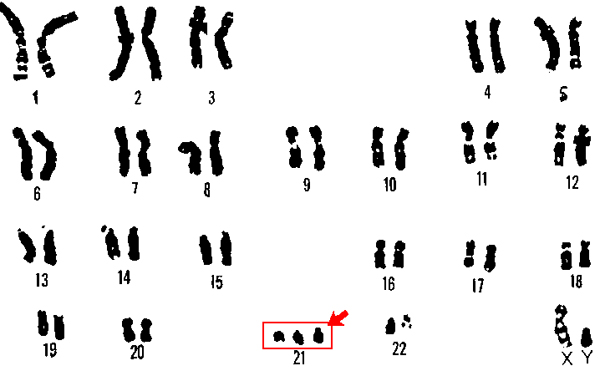 Down syndrome or Trisomy 21 is a genetic problem that can affect anyone in the world. Named after Dr Langdon Down who first recognized and studied it in 1866, the disorder has been studied in great depth today. Though the disease can vary from mild to severe, knowledge about it can go a long way in easing the life of an affected person.

The human genetics are completely coded into the chromosomes. The nucleus of every cell has 46 chromosomes which exist as 23 pairs. One set of 23 come from the father (the sperm cell) and another set of 23 from the mother (the egg cell). The sperms and the eggs are sex cells and are formed through a process called meiosis where the chromosome number of 46 is halved to 23 for each sex cell. Sometimes however, there are defects in the meiosis and both members of a pair of chromosomes enter a single sex cell. When the reproductive process occurs and the sperm fuses with the egg, the chromosomes get paired. If one of them, the sperm or the egg, happens to be a defective sex cell, then there will be atleast one triplet of chromosomes. If the 21st chromosome set turns out to be a triplet the result is a child with Down syndrome.

a. The facial profile will be flat and planar with all features appearing flattened.

b. The eyes slant upwards and are spaced wide apart.

c. The epicanthus, which is the skin of the upper eyelid which covers the inner corner of the eye, gets folded.

d. The eye opening between the two eyelids is very narrow and the iris of the eye has silver spots along the periphery.

e. The bridge of the nose is flattened.

g. The palate inside the mouth has a very high arch.

h. The shape of the head is uniform and round.

i. The neck is very small and sometimes it appears as if it does not exist. However, there is ample skin on the neck.

j. The muscle toning is very bad and this condition of flaccid muscles is often known as hypotonia.

k. The ears are malformed, what is medically known as the dysplastic condition.

l. The hands are short and broad and they have only a single transverse palmar crease.The fifth digit or finger curves or curls inside towards the hand.

m. There is excess space between the first two toes on each foot.

n. On an X Ray, you can even detect a pelvis that is abnormal in its growth or dysplastic.

o. There is a varying degree of mental retardation too.

Down syndrome affects normal life in a very severe manner. It brings along with it the following problems which make life very difficult.

It has been suggested that all expectant mothers be offered the chance of screening for Down syndrome in the 20th week of pregnancy. The following tests are available:

The unconjugated estriol, total human chorionic gonadotropin and serum AFP in the mother’s blood are examined in relation with her weight, age and pregnancy duration (which is assessed by ultrasound). This helps to determine the risk to Down syndrome. A stronger variant of the test is the quadruple test which also measures the inhibin A (alpha fetoprotein (AFP) screening test ) and adds to the accuracy of the tests.

Done between 18-22 weeks of pregnancy, this test looks at any abnormalities and anatomical defects on the unborn fetus. It is recommended for the women who fall in the high risk category.

As stated earlier, the patients have extra skin folds on their neck due to accumulation of fluid. This result is assessed along with the age of the mother and a fair idea whether the syndrome exists or not can be obtained.

If the disease or disorder is diagnosed early, miscarriage can be induced to save the child from suffering lifelong. The following diagnostic tools are available.

A thin needle inserted through the wall of the abdomen via ultrasound guidance, draws out a small amount of amniotic fluid. Done between 16-20 weeks of pregnancy, the fluid can be used to check for chromosomal abnormalities.

Also called as the FISH technique, this can be performed on the sample that has been extracted during amniocentesis or chorionic villus sampling. It determines the number of copies at a particular chromosome.

Just like in amniocentesis, a needle is inserted. This time, the sample taken is the blood from the umbilical cord. Recommended after 18-20 weeks of pregnancy, the test can detect abnormalities in the chromosomes.

There is no cure for Down syndrome as it is a congenital problem. However, corrective surgery can be done to correct most of the anatomical disfigurements. Occupational therapy, physical therapy and speech therapy will definitely go a long way in making like normal for the affected people. The children will be best served by getting enrolled into special needs programs. The babies are most vulnerable. If the complications of the first year are medically taken care of, the person with Down syndrome can live a managed life till almost 55 years of age.