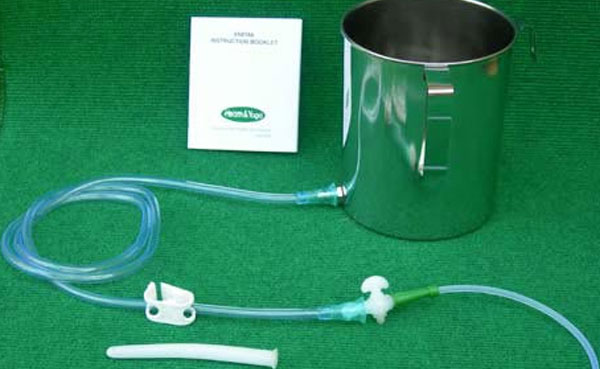 With busy daily schedule, you have very less time to think about your body. Your faulty food habits have resulted in a very annoying and health deteriorating disease called constipation. This can become serious with time and a physical evacuation of stools is required by a method called Enema. The liquids administered in colon , increases the volume of the stools and irrittes the colon to help evacuate the constipated bowels. Enema helps clear the large intestine and improves the digestion process.

Enema is a procedure of administering liquid into the colon (large intestine) via the anus thus increasing the volume of the liquid inside the colon which causes distention and the feeling of urgency to defecate. Enema leads to uncomfortable cramping, bloating and a powerful peristaltic feeling with an urgent feeling of complete evacuation.

A person must consider himself/herself constipated if he/she is facing one or more of the following problems:

a. Infrequent bowel movements, three times or less in a week

b. The need to strain more than 1/4th of the defecation process

When a person starts ignoring the day today constipation episodes or due to some medical condition like bed ridden patients, the constipation can become severe and then there is need for enema.

When is enema used

The main function of enema is to relieve severely constipated individuals but in some cases it is required for other purposes like before medical examinations and detoxification of colon in critical patients.

What are the various enema options available?

The main objective of enema is to increase the bulk volume inside the colon and add lubrication to facilitate defecation. There are various types of enemas available to accomplish the task and they are as follows:

a. Sodium Phosphate Enema: Generally used to cleanse and detoxify the rectum before any medical investigative procedure

b. Coffee Enema : One of the most intense form of enema is coffee enema. It is more preferred in the terminally ill patients and even patients with cancer.

d. Yogurt Enema : There are conditions like Irritable Bowel Syndrome or intestinal parasites where the normal intestinal flora is disturbed along with constipation, yogurt enema helps relieve constipation and normalize normal bacterial flora too.

e. Soapsuds Enema : This type of enema is the oldest forms of enema and is mainly used to cleanse the colon than to relieve constipation, mainly before intimate relationships.

f. Barium Enema : Sometimes it is required to x-ray large intestines to examine the presence of Ulcerative colitis. Barium enema is used to make the intestines opaque in the x-ray so that the condition can be examined by the physician.

Pregnancy is a condition where constipation is quite common due to the pressure of the increasing size of the uterus on the intestines. Moreover the supplements like iron and calcium also leads to constipation. In pregnancy enema can be used but with caution and professional help. The liquid used should be lower in quantity as normally used.

What equipment is used for enema?

Equipment used for enema is a simple one.

Can enema be performed at home?

Enema is a simple procedure and with slight training and practice one can learn to perform enema at home but special care should be taken to prevent infection and the equipment used must be clean and sterilized. Once learned it will be very simple and can be performed routinely if required.

Are there any complications of enema ?

Though the complications of enema are not common but if not properly used enema can lead to: